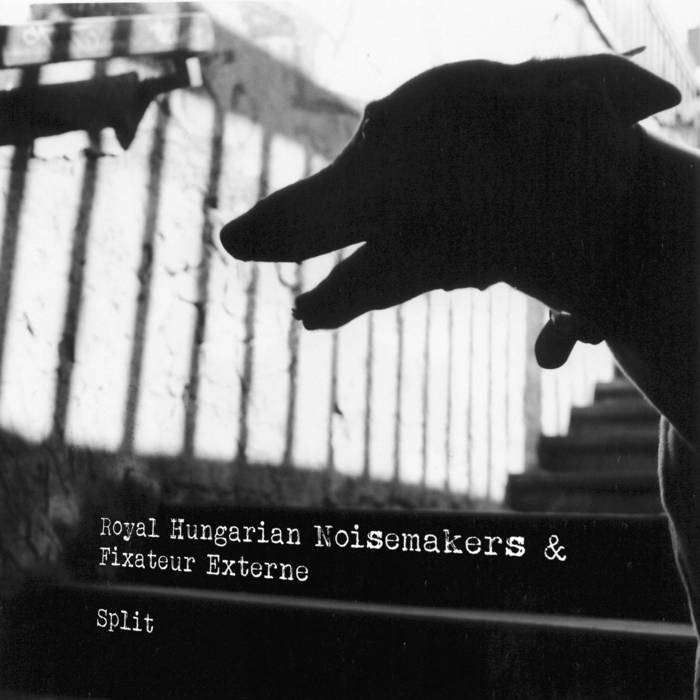 YEAH I KNOW IT SUCKS

The Royal Hungarian Noisemakers & Fixateur Externe are hitting up each other for a rambling case of weird action. They chit chat their unhinged worldy words, bang with the heavy metal doors near a microphone, let things go loopy and mental for a case of outshining the inhabitants of an heavily guarded mental asylum. What can a reviewer say about this ordeal? Perhaps a flat out congratulations? Cause we might just have found ourselves a winning team again! And this winning releasing on the brilliantly named Hungarian label ‘unsigned’! I mean how more brilliant do you wanted it to be?
They out-cuckoo each other like weirdos that are in for it to underline their insanity ratings in order to possible get away with murder. It’s a cute mingling epicentre only to be sorted out by the fine sounding presence of a wise dog. We can see the canine creature wisely on the release it’s front cover but also hear the appraisal of it in experimental music form. It’s probably the sanest piece of music on this split. Slowly walking around with a dedicated slow pace, a sniff of distortion and a spoon full of guardedness. We are all safe with this kind of music around, but maybe post deliverers might be in less fortunate surroundings! <KN>
yeahiknowitsucks.wordpress.com/2019/06/27/royal-hungarian-noisemakers-fixateur-externe-split/

Royal Hungarian Noisemakers are a very active collective of nosicians from Budapest, Hungary and luckily I’ve had a chance to hear them live before. Their experimentations may vary depending on a mood, occasion, space they’re performing or recording, but most importantly, their performances are spontaneous and good. Fixateur Externe is a musique concrete project of Kálmán Pongrácz, mostly focused on dadaist sound poetry and performance art with lots of effects and loops, from homemade musical instruments to traditional folk instruments. Their Split CD is more like a collection of live collaborations comprised of six weird minimalistic avant-garde compositions that have been recorded during a short span time period, so compositions 1, 2, 3 has been recorded in Budapest at 3. Ember Összművészeti Találkozó – 29. Oct. 2018; partially mixed composition 4 has been recorded in Graz, Austria at Chmafu Nocords’ Interpenetration 7. Dec. 2018; partially mixed composition 5 has been recorded at Auxin Zajfesztivál, Szabadkikötő, Pécs 28. Mar. 2019 and the composition 6 has been recorded Under Szubcult: szabadság és szeretet napalm, Zeg-Zug, Budapest – 4. Apr. 2019. Experimentations can be best described as minimal sound clusters comprised of various slightly distorted electronics; various music software and VSTs; various musical instruments such as saxophone, xylophone, handbell, gong and a lot of processed and unprocessed hysterical vocals. This kind of experimentations kinda reminded me a lot of some musique concrete experimentations I’ve encountered and listened before, but with a lot of harsher approach to the involved electronics. Hysterical vocals are really giving some weird, but the entertaining atmosphere to those recordings and somehow they are the loudest on this recordings, so I assume the vocals are purposely focused. The atmosphere is leaving almost an eerie impression on the listeners, perhaps because of the music box sounds involved in a couple of compositions, so maybe a couple of those tunes would be a perfect score for some horror movie. These guys have paid a lot of attention to the production of their sounds, so all the presented parts of their live recordings are perfectly hearable and you’ll hear even the tiniest sound without a fuss. As I said before, this Split CD will suit perfectly to some fans of minimal noise, harsh noise, musique concrete, but also to all the curious minds who are looking out for some quality sound art experimentations. The CD has been published by the Unsigned, Hungarian record label specialized in all experimental forms, so pay them a visit and check out all their sound artists at their bandcamp page.
thoughtswordsactionblog.wordpress.com/2019/07/30/royal-hungarian-noisemakers-fixateur-extreme-split-cd-unsigned/?fbclid=IwAR1AUYLn81Mwrh2vt6X9jQz4DXZcc2SzFB4d91uBwUnI4a4DCfC9wPFCp6o

Releases from the house of Unsigned, a label from Budapest, not always excel in very clear, informative covers. This is not different; I gather the first three pieces are by Hungarian Noise Makers and the other three by Fixateur Externe. The CDR also contains a video by the first. But all of this is more or less fluid here. I can imagine bands and projects like this having the same members. One Attila Vlad gets credit for 'software instruments and noises' on five of the six tracks.
This is a release that lives up to the name of one of the projects, a world of noise. Not the kind of harsh noise wall, or mindless distortion of some kind, but oddly enough, the voice plays an important role in all of these pieces. Distorted, screaming, with many sound effects applied to those voices, amidst a barrage of manipulations that could be analogue (reel-to-reel manipulations, but perhaps I was distracted by the sight of such a machine in mp4 video, which turned out to be
the noisiest piece of the collection). Hungarian Noise Makers sound a tad more electronic and reminded me of Henri Chopin being the singer of an industrial noise act, whereas Fixateur Externe has a more organisation, a beat even, but also add elements of improvisation, such as a saxophone in 'Isten Szerne'. The voice is not as screaming and distorted but weird in a different way. Layered, vague and not necessarily speaking or singing a coherent word or two. Is it good?
Or bad? I don't know. It is very much a product of direct energy, a worthy underground product. (FdW)
www.vitalweekly.net/1191.html

Attila Vlad is a portmanteau name that like Marylin Manson and Fred Boycott sounds better than the names it was derived from. Sort of. I imagine Attila Vlad to be the sort of person who signs fan autographs with a quill dipped in red ink. Maybe he signs important documents in the same way? Ah Mr Vlad so pleased to see you, we have a few papers for you to sign, I see you’ve brought your own quill how marvelous. Maybe Attila has another name, a name that he was born with that doesn’t fit within the framework of a noise project and he decided to change it to make himself sound harder? Maybe his real name is László Moholy-Nagy and he didn’t want to be confused with the Hungarian artist of the same name. These things happen.

Attila Vlad is all over the Royal Hungarian Noisemakers & Fixateur Externe release as is Rovar17 [real name Marcel Lajos Breuer]. This being a multimedia release we have an MP4 video showing a reel to reel deck and lots of ants doing what ants do to a soundtrack of noise and vocals that may well sound like Fred Dors doing what Fred Dors does best, or was it Diana West? I forget. What these mangled vocals and searing noise blasts do sound like is Costes. A Hungarian Costes then. Sort of. The first three tracks are all versions of ‘Anyu: kád = ki-o-káá’ and these are the three noisiest tracks on the disc. Not bad either with that lunatic vocal getting stretched, looped, slowed down and Daleked over various elements that include clanging metal and machine gun noise. For whatever reason the last three tracks take a detour into more sinister territory ‘Der Hund’ has a low volume thump covered in distant voices, radio comms delivered at a barely audible level, ‘Elég Volt A Látomásból’ passes in a similar style and sounds like the conversations heard in the control room at Chernobyl just as all the dials started going full melt. Last track ‘Isten Szeme’ is almost Faust-ian with a distant honking sax and Hungarian voices slurred into one big Goulash. All tracks recorded live. Unicum may have been involved.
idwalfisher.blogspot.com/2019/08/royal-hungarian-noisemakers-fixateur.html